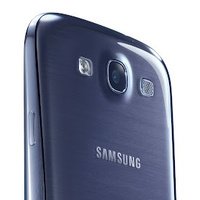 While the mobile technology fans are still thrilled with the fantastic Samsung Galaxy S3 performances, the phone that still keeps the attention of world-wide phone users, there have been some information that the South Korean Samsung company is already developing its new high end phone, the Galaxy S4 the inheritor of the fantastic Galaxy S3. The appearance of the new Galaxy S4 (according to some rumors) is scheduled for the MVC 2013, and although there is not much information about this phone, which from the business strategy point of view is quite logical, some leaked information suggest that the Galaxy S4 will be equipped with a 13MP camera. [caption id="attachment_2990" align="aligncenter" width="200"] Will the Galaxy S4 have the rumored 13MP camera[/caption] The Samsung Galaxy S3 is equipped with a, to be honest, fantastic 8MP shooter. From the technical point of view, increasing the megapixel count is not an easy task at all if Samsung wants to keep the slim look of its S series, and that’s the exact look that gives these devices the elegant, sophisticated and let’s call it Android S series trademark look. Furthermore, the higher megapixel camera further increases the manufacturer’s challenge because these lenses in low light conditions due to the simple fact that pixels get smaller, and noise gets in easier. [caption id="attachment_2991" align="aligncenter" width="420"] A 13 MP camera build structure[/caption] To put the manufacturer’s problems aside, mobile phone users across the planet expect a higher MP camera on the Galaxy S4, but also improved camera options and performances. Apparently a 13MP camera was originally designed for the Galaxy S3 and the Galaxy Note 2, but these expectations were not fulfilled because both phones feature a 8MP camera. If the 13MP camera “come true” , Samsung Galaxy S4 will be able to snap pictures in 4208x3120 pixel resolution, and that photo quality is really something worth waiting for. Source: Samsung Updates