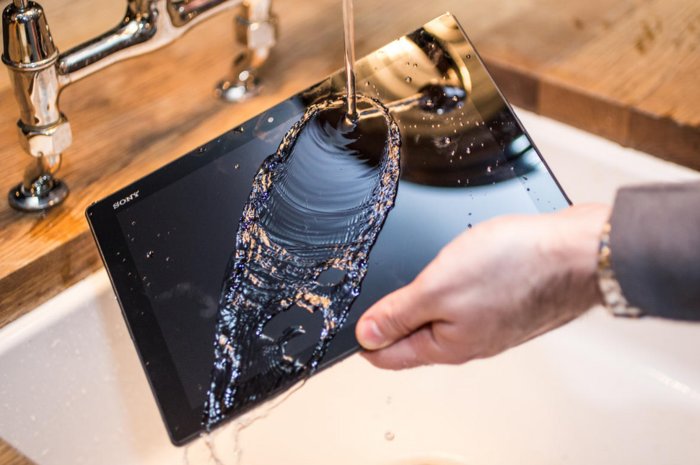 Some say that Samsung and HTC had been the centre of attention on the Mobile’s World Congress 2015 which took place in Barcelona, by presenting the new Galaxy S6 and One M9, but also they admit that the Congress was complete only after Sony presented a new member from their family- The Sony Xperia Z4 Tablet.

This 10-inch tablet has definitely an impeccable design, it is water proof and it has some mighty performances that will nail everybody of its feet. Sony put the records straight. They wanted to make a better model than the Xperia Z2 Tablet was, and bearing in mind the impression that the prime Tablet Xperia S4 left we are pretty sure that it succeeded.

Sony Xperia Z4 is a tablet of 10 inches, IP certified water resistant and with a 2K display. That is enough sign that this will be a mind-blowing tablet that will probably have a good price, but we do not know how much money it will take you to buy this fellow since Sony did not announce its price. The Xperia Z4 was announced to be put in sale in the spring.

We already know the design of Sony’s devices and the Sony Xperia Z4 is just the right example for it. It is almost the same as its ancestor; it doesn’t have any classy looking buttons on the front of the device and it has a matt plastic cover on the back. On the front (upper-left) of the device you will find the well-known Sony logo. This super light and amazingly slim device measures 6.1 mm in width and is the lightest 10- inch tablet on the world with its 392 g weight.

Are you ready for this? Sony Xperia Z4 is completely water proof! It can be easily used in bathrooms, under water and the future uses don’t even need to worry about the water entering into the device trough an USB port.

Sony has implemented 1600x2560 pixels into its 10-inch display. Right from Barcelona affirmative comment arrived when the quality of the images is concerned. It also has the newest and the strongest processor- the Snapdragon 810. This octa-core tablet has 3GB of RAM memory and will have the new Android 5.0 Lollipop operative system.

On the back it has a 13 megapixels camera which also makes it the best tablet on the planet! Even the iPad Air 2 does not have so many pixels. On the front of the tablet there is a 5 megapixels selfie camera which we all love. The battery life is considered to last 2 days which is again incredible!

With its perfect design, ID certified water-proof body, outstanding display and performance; Sony is definitely made the best tablet on earth- the Sony Xperia Z4!

We congratulate to Sony for its great job on improving the characteristics of this device which made it better than Xperia Z3 Compact.