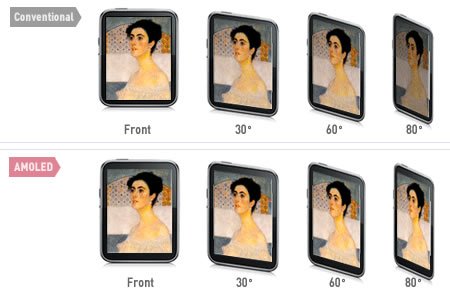 Amoled definition will give you answer in couple ways: Amoled is shorter of Active-Matrix Organic Light-Emitting Diode, technology used in mobile phone industry and televisions. Borrowed from OLED display, where pixels are self illuminated (organic elements create the electroluminescent material) and with Active-Matrix method control individual pixels (this way is reduced power consumption). If you use less power, you get longer battery life.

Amoled definition expands even more: AMOLED display are thinner and more flexible, which give them great range of products where they can be installed - mobile phones, media players, game consoles and digital cameras. [caption id="attachment_4327" align="aligncenter" width="454"] Conventional Vs AMOLED display[/caption]

Some manufacturers built into the AMOLED display touch sensors, so called in-cell touch panels. Samsungis one of two manufacturers who can produce these amoled displays and their technology is SUPER AMOLED.

Beside touch functions, Active-matrix OLED display are future of tomorrows TV, but it's still a bit too pricey.